Winners will be announced and awards presented at the Alberta Book Awards Gala on Saturday June 9, 2012 in conjunction with Book Publishers Association of Alberta’s (BPAA) Alberta Book Publishing Awards. The celebration will take place in Calgary alongside the WGA’s 2012 Writers Conference.

I am thrilled to announce that KARMA has been shortlisted for the R. Ross Annett Award for Children's Literature.
The two other books nominated are Jacqueline Guest's "Ghost Messages" and Barb Howard's "The Dewpoint Show". You can read more about these wonderful Alberta writers at their sites:
Barb Howard http://www.barbhoward.ca/
Jacqueline Guest http://www.jacquelineguest.com/
Posted by Cathy Ostlere at 8:11 AM No comments: 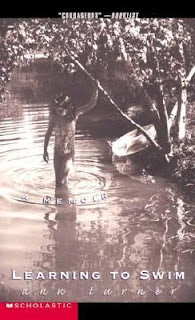 I have just finished reading the exquisite memoir titled Learning to Swim by Ann Turner. First published in 2000 this small book is an excellent example of the power of the verse narrative to tell a sensitive, emotional, and redemptive story. Ms. Turner bravely recounts being abused by an older boy when she is at her family’s summer home. In spare, lyrical prose we experience the wonder of a young girl’s world – a tree hanging over a pond where she is trying to learn to swim, a net of cobwebs covering a blueberry bush, her baby brother’s hair where she whispers her terrible secret. We also see her confusion as to what is happening to her and her silent pleading for a grownup to notice. Reading Learning to Swim is a sobering even terrifying experience. And it is a testament to the need for abuse survivors to tell the truth. If the story was told in traditional prose, I think the writer may have required a more detailed story; instead Miss Turner focuses on relating the experience from the perspective of a young girl, and this is a powerful voice.

Posted by Cathy Ostlere at 12:05 PM No comments: