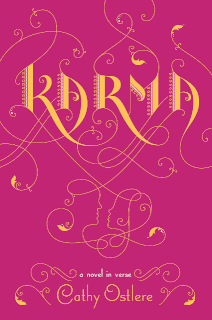 About Karma she writes:
“Karma is a rich historical novel by Cathy Ostlere that's wild and unpredictable. Set in 1984, it begins with the poetic diary entries of 15-year-old Maya, whose more-or-less typical high school life in Canada is shattered when her mother commits suicide. Maya, who is half-Hindu and half-Sikh, flies to India with her father and her mother's ashes. Caught up in the violent aftermath of Indira Gandhi's assassination, the two are separated, and Maya is cast into the streets alone. Sandeep — an ebullient, charming, fiery young man — shares the narration. Epic and almost surreal in scope, a love story emerges. Ostlere divulges secret after secret. Depicted as a "novel-in-verse," the language is beautiful, the pages turn quickly and the story becomes a fast-paced whirlwind of startling images, action and heartfelt emotion.”
Check out the other four books featured:
Flip by Martyn Bedford
Delirium by Lauren Oliver
Ten Miles Past Normal by Frances O'Roark
Trapped by Michael Northrop
Posted by Tori/Cathy at 1:01 PM