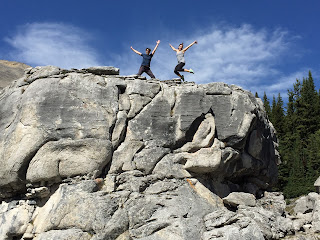 Yeah, huge fun.
And it turns out it's good for the brain - this writer's brain, in particular.

Need brute strength? Nope.
Just a desire to be off balance - inside and out.

So here are the benefits:

Decision making.
Do I really need this character?

Problem Solving.
All creativity is about problem solving.

Determination. Need this more than money.

Planning. Well, not for all writers ... seat of the pants works too.

Concentration. Can you say headache?

Ok, so if bouldering is a vertical problem: what to hold (keep), where to step (let go and move forward), how to balance (find the right word), where to rest (white space) - well, so is writing.

And climbing competes against gravity, time, fatigue, and the mind (Myles Moser). Just like writing!

Posted by Cathy Ostlere at 8:49 PM No comments:

For a writer, crafting a verse novel is a thrilling exploration of language, form and story. No niggling voices nagging about punctuation and capitalization – only free-floating ideas, images, playful language and that wonderful white space – the drama of the implied thought.

Writing a verse novel requires huge leaps of faith to soar over terrifying doubt. It’s a risky, sometimes crazy way to tell a story – but verse novelists have exceptional conviction: if they’re exhilarated by writing these narratives they believe that their readers will be too.

Canadian writers have been slower to experiment with this beautiful, thoughtful genre – American and Australian writers have been doing it much longer – but we have finally arrived. So, Canadian verse novelists – take a well-deserved bow. Our list may be short but every book on it is pure joy.

Ann and Seamus by Kevin Major, 2004, illustrated by Kevin Blackwood
In 1828, Ann and her father rescue 163 Irish immigrants from a shipwreck off the coast of Newfoundland. Inspired by historical events.

Audacious by Gabrielle Prendergast, to-be-released October 2013
Sixteen-year-old Raphaelle says the wrong thing, antagonizes the wrong people and has the wrong attitude. She can't do anything right except draw, but she draws the wrong pictures that get her into a heap of trouble. This is a wild, bold story. Kudos to Gabrielle.

Burn by Alma Fullerton, 2010
Usually, when Casey's famous mom went on tour, Casey got to go. But since settling down with a new husband and baby, things have changed. Casey begins building fires to send smoke signals to her mother, hoping her mother will see her message.

Counting Back from Nine by Valerie Sherrard, 2012
Laren Olivier knows the rules, but her attraction to a friend’s ex-boyfriend is strong. When tragedy strikes, Laren finds herself struggling with a discovery so shocking it rocks the very foundation of her world. This quiet book sneaks up on you and then bam – hits you in the heart.

Fishtailing by Wendy Phillips, 2010
Natalie moves to a new school and entangles others in her forbidden world of partying and rebellion. A perfect book.

Ghost Horse of the Mounties by Sean O Huigin, 1991 illustrated by Barry Moser
In this narrative poem, a storm overwhelms the Royal Canadian Mounties, scattering their horses in all directions and resulting in the mysterious disappearance of one horse. I love this book – though hard to find.

I’ll Be Watching by Pamela Porter, 2011
Set in Canada during the Great Depression, orphans, sixteen-year-old Ran, fourteen-year-old Nora, twelve-year-old Jim and little Addie find a way to make ends meet under the watchful eye of their dead parents. Told from multiple points of view, this book offers a compelling tale of faith and courage in the face of suffering and evil.

In the Garage by Alma Fullerton, 2006
A grief-stricken BJ deals with the aftermath of her friend Alex’s death as we read Alex’s journal.

Karma by Cathy Ostlere, 2011
After her mother’s suicide, 15-year-old Maya and her father travel from Canada to India for a traditional burial. The year is 1984, and on the night of their arrival in New Delhi, Prime Minister Indira Gandhi is assassinated. The city erupts in chaos and Maya is separated from her father. This one’s mine!

Libertad by Alma Fullerton, 2008
When Libertad's mother is killed in an accident at the Guatemalan city dump where the family picks trash, Libertad and his little brother make the trip to the United States to find their father. Beautiful.

My book of life by Angel by Martine Leavitt, 2012
Sixteen-year-old Angel is coerced into drugs and prostitution by a man she meets in a mall. You’ve never read a verse novel like this one. Based on real events.

Nix Minus One by Jill MacLean, 2012
When Nix's older sister, Roxy, starts breaking the rules things spiral out of control. This is a heartbreaking story told with grace.

The Apprentice’s Masterpiece by Melanie Little, 2009
Ramon, 15, is a Jew forced to convert to Christianity. His family takes in Amir, born Muslim, also forced to give up his faith, during the Spanish Inquisition. Sophisticated and profound.

The Crazy Man by Pamela Porter, 2005
Emaline, 12, is maimed in a freak farm accident. Her father shoots the dog and storms off and doesn't return. Her mother, in need of help around the farm, takes in Angus, a gentle giant from the mental hospital. A Canadian classic.

Walking on Glass by Alma Fullerton, 2007
A young man's mother has attempted suicide and is left in a coma.

Yellow Mini by Lori Weber
Mark has inherited a yellow mini from his deceased father. Stacey, his girlfriend, Mary and Annabelle alternate voices as they find their niches, be it concert pianist or activist. Dramatic and perfect for teenagers.

To see more fabulous verse novels from all over the world check out Sarah Tregay’s list.

Today, I’m posting a YA book review to support the A More Diverse Universe Tour to raise awareness and celebrate People of Colour Speculative Fiction Authors. You can read more about this tour on the blog BookLust - Aarti’s site and see a list of all participants.
When my friend, Dale Lee Kwong, asked me if I planned to participate in the blog tour I thought, ok, here’s an opportunity to expand on my reading habits. So, because I’m Canadian, I decided to seek out a Canadian writer who might qualify. The YA list was small but when I saw that Canadian-Ojibway writer Drew Hayden Taylor wrote a teen book about a 350 year-old aboriginal vampire, I was in! 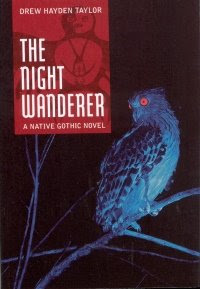 The book is called The Night Wanderer. It has a spirited and wry sixteen-year-old character named Tiffany and a weary, soul-seeking vampire named Pierre L’Errant who returns from Europe to his birthplace on what is now a First Nations reserve in Ontario. Three hundred and fifty years ago he was a curious, adventurous teen who left his land and family to cross the Atlantic with French fur traders. In France, he contracts an illness that should have killed him but by a twist of fate he’s bitten on the neck and he becomes a bloodthirsty vampire. But now he’s back – to save his soul, and in a strange way, to save Tiffany too.
Tiffany lives with her father, Keith, and Anishinabe grandmother, Granny Ruth, on the reserve. Her mother has abandoned the family and lives with a white man in another part of Canada. Tiffany has a white boyfriend, Tony, but when they’re out shopping he takes advantage of her tax-free status card. In a nutshell, Tiffany’s life is about as happy as a whole lot of other teenagers’ lives in North America: she lives in a town where nothing happens; her mother has abandoned her; her father is angry all the time; she fights with her boyfriend; she’s bullied; and she is failing History. But what Tiffany has that most teens don’t have is a father who rents out her room to a stranger who sleeps all day and wanders the land at night.
“Tiffany was close enough to smell the mustiness coming off the vertical green carpet. The first thing she noticed was that there was no light coming from the room. Only darkness. This in itself was not all that unusual, considering it was a windowless part of the basement. Still, it was an odd darkness, like the difference between Coke and diet Coke. It was … unusual. There was still no sound so she decided to chance it and take that peak. Why, she didn’t know. Her hand brushed the border of the carpeted door as she began to push it aside.” page 98, The Night Wanderer

The Night Wanderer is expertly written in a third person voice that tells the tale with a tense yet comic touch. Tiffany’s self-deprecating humor is a highlight that makes this character unforgettable. The vampire is formidable and admirable in his struggle to fight his hunger while he contemplates longingly the land of his birth. The gothic vampire myth is served well here by the Northern Canadian landscape. The land is dark and shadowy. There are noises in the forest. Animals scurrying. Twigs and branches breaking. Long roads and a deep lake. The reserve is a mysterious but not menacing place as it is home for both Tiffany and Pierre – two native Canadians who are struggling for clarity and expression of their true selves.

Taylor explores many themes in his 200 page novel: coming-of-age, prejudice, bullying, family, education, history, aboriginal language, and suicide. This isn’t a book for readers who expect a more traditional vampire tale with sexual overtones. Instead Hayden writes a smart tale about a smart teenage girl, an aging vampire, and what happens when they meet in the middle of a dark Canadian forest.

Drew Hayden Taylor is a well-known Canadian-Ojibway playwright, author, journalist, filmmaker, and stand-up comedian from the Curve Lake First Nations in Ontario. He is a writer who’s committed to educating the world about issues that impact the lives of Canada’s First Nations. The Night Wanderer, Taylor’s first teen novel, was published by Annick Press in 2007. Read more here. 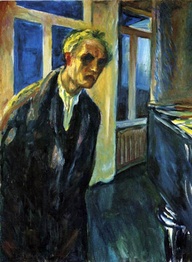 A little more ... here's an image of Edvard Munch's The Night Wanderer:
Posted by Cathy Ostlere at 7:35 AM 4 comments: